Shingles or Herpes Zoster is a viral infection, generally seen along the neck, chest, stomach, and back on the surface of the skin. It is caused by the same virus of chickenpox, named varicella-zoster. So, it is developed to those people who have suffered from chickenpox previously. These viruses of chickenpox, after recovery from chickenpox too, varicella-zoster remain dormant in the nervous system for years and get activated if favorable condition prevails causing shingles. It means, if you have never suffered from chicken-pox then there is a rare chance to develop shingles.

Such type of viral infection appears as a stripe of blisters that cause pain and burning. Normally, shingles clear-up within two to three weeks, and rarely occurs more than once in the same person.

The main cause of shingles is the infection of Herpes Zoster virus. When our body’s immunity power slows down then this type of virus enters into our body through nerves of the skin and muscle. The causes of shingles can be listed as below:

The symptoms of shingles or Herpes Zoster is characterised by  a viral infection, generally seen as red patches, later-on filled with fuid, along the neck, chest, stomach, and back on the surface of the skin. The symptoms are listed below:

Shingles occurs to everyone, but certain factors put people at risk. The risk factors are: 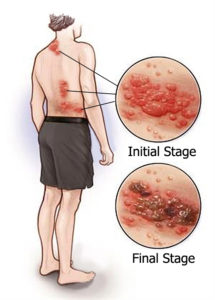 It is easily diagnosed hearing the symptoms of patient and physical examination of the rashes and blisters on the body. Doctor will also ask about your medical history. Some times lab test of fluid from the blisters to confirm the presence of viruses.

Actually, viruses are not killed with the aid of medications. Medication is prescribed to ease the symptoms and shorten the length of the infection. Medicines given to treat shingles are Acyclovir, Famciclovir, Valacyclovir and medicines to relief pain are Ibuprofen, Acetaminophen etc. Sometimes, antihistamines like Diphenhydramin is also prescribed by the doctor. Meanwhile, patients should be more careful in their sanitation.

Send us your feedback on this article